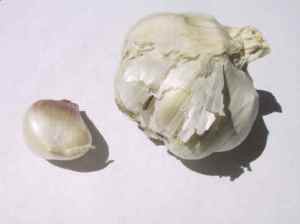 I’m sure every cook has at least one, or many, memorable disasters stashed away in their memory, and it is no different for me. I’ve never been prone to burning things; my problem was simply misreading recipes. With the internet and all the available sources, there really isn’t a reason to not understand what the recipe calls for. Just a simple click on Google can answer almost any culinary question in existence (that easy right). Well, call it a case of stubbornness or just shear naivety, but I didn’t reach out to anything but my limited food encyclopedia stashed in my brain on this incident.

A few years back when I really started to enjoy and get in to cooking, I wanted to impress my boyfriend at the time with my new skill. So I sought out to find an impressive recipe that would showcase my new hobby.

Still keeping it simple I chose Rachael Ray and one of her 30 minute meals.

As you can see in the recipe it called for 4 cloves of Garlic…FOUR!! Ha, well it appeared that my new hobby was just that….a NEW hobby. In other words, I had no clue what I was doing. So I went to the store to get my supplies and grabbed 4 garlic bulbs. Wait…did you catch that..4 BULBS. So with my boyfriend sitting on the couch patiently awaiting dinner I starting prepping my meal. About an hour later I was finished chopping up my second garlic bulb and it finally hit me that something wasn’t right. An hour had already gone by, my boyfriend is starving, and I have a heaping bowl of garlic. I decided to move on with the rest of the prepping. When I finally started cooking I got to the garlic part and was a little scared at how much I had. So instead of putting the entire bowl in there I put half (insert blank stare here). Needless to say whatever sauce was suppose to be in the dish was now just a giant clump of garlic.

I was finally done cooking and ready to present my creation to the hungry man on the couch. Well…do I have to say it…it was AWFUL! Not only could you kill a vampire by just simply walking by my apartment, but my poor boyfriend said he was told at work the next day, and the next, that he wreaked of garlic. I must say though he was a trooper, he cleaned his plate with a big smile on his face and a “that was great babe”! Liar.

The good news is I learned the hard way that garlic cloves are actually the pieces that are all clumped together when you take the paper off, and the bulb is the entire thing. Oh, and that boyfriend of mine, he’s now my husband and has enjoyed much better recipes since then. So he claims! 😉

There’s nothing like learning the hard way…thanks Google, where were you when I needed ya!